Flaming Barrels of Love
***Golden Script Competition 2018 Finalist***
***Top 50 Finalist - Your Script Produced! 2019***
***Quarter-Finalist - WriteMovies Romance and Comedy Award 2021***
***UK Film Festival Feature Script Competition 2018/19 - Final 50***
A trip to Ottery St Mary in Devon for the annual barrel burning
festival turns into a romantic, comic odyssey.
​  Steve returns to his home town for the yearly barrel burning
festival with his metropolitan fiancé Felicity in tow, but his
weekend is complicated by the appearance of an unrequited
teenage crush, slapstick adventures among old friends and
life-changing realisations, all set against the ever-present
danger of those flaming tar barrels.
A romantic comedy set in the English county of Devon, 'Flaming
Barrels of Love' is based around the annual barrel burning
festival which takes place in the small town of Ottery St. Mary.
This feature is both a British take on the return-to-home-town
coming of age comedy, and a crowd-pleasing romance.
Flaming Barrels of Love has been nominated as a finalist in the 2018 Golden Script Competition,
reached the Final 50 of the 2019 UK Film Festival Feature Script Competition, was a Quarter-Finalist
in the 2021 WriteMovies Romance and Comedy Award and was a Top 50 Finalist in the 2019
Your Script Produced! competition.
​To read a detailed synopsis, the opening extract or to request a copy of the
entire spec screenplay, please email: [email protected].
To read more about low-budget thriller Passive-Aggressive click here:
Alan Devey
Writer - Producer - Presenter 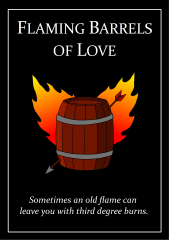