Home Defence - Paranoia & Lifestyle Webzine
Home Defence was created in 1999 by Alan Devey
and Christopher Perry, initially as a homemade
fanzine. The hard copy version was short-lived, but
the concept of a ‘paranoia and lifestyle’ magazine
survived and moved online in 2003 where it has
resided ever since. Our concept originated in the
realisation there was little similar to The Onion
in the UK of the time; nothing focussed on ‘long-
form satire’ around a prevailing political climate.
The ideas underpinning HDUK were inspired by the comedy routines of Bill Hicks as well as
Adam Curtis’ ‘The Power of Nightmares’ documentary series. In short, the two creators believe
politicians and the media have a vested interest in keeping people scared, and that a specific
agenda is constantly being pushed. This enforced reasoning is aimed at retaining support for
the established order, but their tenets actually have little basis in reality.
Because now more than ever citizens are subject to exaggeration and scaremongering,
particularly when it comes to the ‘terrorist threat’. At Home Defence, we remind readers a
British citizen is more likely to be trampled under a cow than killed by someone in support of
a violent ideology.
Over the years Home Defence has retained its ironic stance and rudimentary layout while
being open to encompassing new areas like the foodie fad, Unwellness Gurus, sporting
investigations, outlandish hobbies, travel drinking and obsessive gamers. Contributors down
the years have included the BAFTA-winning creator of ‘So Awkward’ Julie Bower, journalist and
fiction writer Mark Piggott and ‘Not The Booker’ nominee AJ Kirby.
Thanks to editor Al Likilla and erstwhile inspiration Clint Panzerdivision (the creators’ nom de
guerres) Home Defence continued to cast its eye over the contemporary political scene through
regular, bi-monthly updates up until late 2016 when other creative priorities and the insane speed
of a relentless news cycle stopped it from continuing to be viable. Still, 17 years is a pretty good run!
Here are a few of our more popular stories from the final months of the site being active:
Exclusive Lifestyle Interview With Foreign Secretary Boris Johnson
New Prime Minister Theresa May - "Everything's Alright Now, Mummy's Here"
Black Cab Drivers Protest Against 21st Century
Trump Presidential Rally Unexpectedly Climaxes With ‘Good Ol’ Fashioned Lynching’
Guest Columnist Bashar al-Assad - Your Country Is In Trouble, I Can Help!
Katie Hopkins Revealed to be ‘Sleeper Agent’ For Islamic Extremism
Labour Party To Keep Having Leadership Elections "Until We Get The Answer We Want" 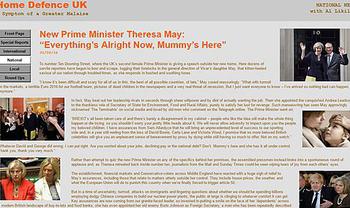