The Gestalt Switch
Read an interview with Alan about this book, the current UK
political situation and writing in general on the website of
poet Ben Banyard.
A speculative fiction concerning delusion, propaganda,
polarisation and the identities we cling to....
In 2023 it is seven years since the referendum and the prospect
of leaving the European Union feels as far away as ever. Across
the UK the ideologies of the opposing sides have hardened, with
those media-labelled ‘Positives’ who voted Yes to leaving clashing
with civilians dismissed as ‘Negative’ because they said No in
2016.
Now a ‘Party for Change’ has come to power, promising to deliver Brexit whatever the cost.           Boosted by this supposed progress toward the restoration of sovereignty, fresh optimism
pervades proud Englishmen like 68 year-old Ian Freeman. Ian is inspired to start a diary,
intending to record his nation’s emancipation alongside the travails of an ailment-ridden man
with a problematic family life in a typical suburban town.
But when a newly-installed populist is apparently targeted by ‘Negative terrorists’ a
nationwide crackdown on pro-EU sentiment gets underway. Now Ian finds himself embroiled
with state-backed ‘Local Action Groups’; undertaking the government’s dirty work for them
to turn neighbour against neighbour. Meanwhile, in the far future, Ian's lost manuscript is
recovered by a marginalised US academic who is not what he seems...
A speculative fiction close enough to real events to be horribly plausible, ‘The Gestalt Switch’
explores how propaganda can convince a prosperous country to embrace intolerance and mass
murder.
The new novel from Alan Devey is equally inspired by Nabokov’s ‘Pale Fire’,
Orwell’s ‘1984’, the rise and fall of the UK Independence Party and Philip
Gourevitch’s peerless work on the Rwandan genocide ‘We Wish To Inform You
That Tomorrow We Will Be Killed With Our Families’. It is available for e-reader,
tablet, phone or other device with the free app here. The paperback version can
be ordered here.
From the online reviews:
"Words like terrifying and prescient spring to mind when you read this timely
tome. Devey’s novel is funny, tragic, and illuminating in equal measure."
"a well-crafted epistolary take on a bleak post-Brexit near-future, couldn’t be
more timely or relevant."
"This is the true test of a dystopic novel. Can it creep into your current life and create fear,
can it make you look around and question the future? The Gestalt Switch does this well."
"an enjoyable, thought-provoking and compelling read"
​   "A horribly prescient portrait of a divided country slowly sliding into the abyss."
Alan Devey
Writer - Producer - Presenter 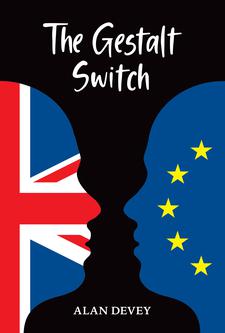